skip to main | skip to sidebar

Touched By A Cloud 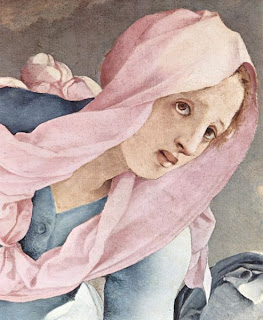 Touched by a Cloud

“Art teaches nothing, except the significance of life.” – Henry Miller

When I was invited to tag along with a friend of mine to Florence recently, my first instinct was to say no. Anyone that has been to Florence on a hot, summer day, knows very well that Florentine temperatures can be akin to Hades’. I really didn’t want to face that kind of heat, but as my friend is an incredibly kind and sweet lady, and someone for whom I have an enormous respect, I just couldn’t deny her request. And so, arguing against my natural instinct to avoid profuse sweating, I agreed.

As it turned out, it was one of the most wonderful times I’ve ever spent in that beautiful city. From the beginning of our excursion, things just seemed to go magically. Boarding the train, I mistakenly led us to a first class car, instead of the second class seat for which we had tickets. I wasn’t aware of my mistake (although the presence of air conditioning and bigger, comfier seats should have been a clue), until I saw the conductor coming down the isle, checking passenger’s tickets and then telling them to move to another car. Amy, my friend, suggested we just get up and move before being asked to, but I wanted to savor every last moment of air-conditioning while I could. I could see the conductor slowly making his way along the aisle, sending people off to lower-class cars as he went. Then, strangely enough, just before he got to our seats, he wandered away, never to return. We arrived in Florence, cool, refreshed, and happy.

Amy had various errands to run, as she was leaving for Germany in just a few days. We arranged her tickets, found out where to meet the bus that would take her to the airport, and so on. Once the business of our trip was accomplished, we settled into shopping mode and headed off for the famous San Lorenzo market. After that successful, and surprisingly not very costly leg of our journey was complete, we stumbled across a wonderful little “trattoria” near the Ponte Vecchio, called “Trattoria Mamma Gina.” The name was so inviting, we decided this was the place to have lunch, and for the life of me, it was one of the most delicious meals I’ve had yet in Italy. Who knew that Eggplant Parmesan could be such a sensual experience?

After lunch, we began the lazy, enjoyable phase of just wandering aimlessly, looking in shop windows, admiring the beautiful people around us, and eating gelato. Then as we were coming back across the Ponte Vecchio again, I asked Amy’s indulgence, saying that I would really love to pop into the church of Santa Felicità for just a moment, to take a peek at my favorite painting. She enthusiastically agreed, and so we made our way through the little stands of “Ciao Bella” T-shirt vendors, to the soft yellow church, quietly set back off the busy buzz of the street. 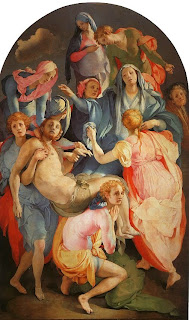 We entered the church, and just to the right of the entrance, we approached the Capponi chapel. This was not the first time I’ve been there. Nearly every time I come to Florence, I make a pilgrimage to this place, to drink in the beauty of the painting the dominates the small chapel. “The Deposition” by Jacopo Pontormo, painted in 1528, is over ten feet tall and six feet wide, and this oil-on-wood work takes my breath away every time I see it. I live in Italy, so being exposed to amazing works of art is thankfully not a rare thing for me, but this particular painting touches me like none other. In a swirling composition of melancholy, bright pinks and blues drag the eye around the circle of characters, each expressing its own reaction to the death of Christ. The empty center emphasizes the feeling of loss in this masterpiece, as does the swooning Madonna, being caught as she falls, by those behind her. The background is vacant, devoid of anything but a single, lonely cloud in the upper left hand corner, adding even more to the emotion, the solitude one feels after losing something as precious as Love.

It had been a while since I had last visited Santa Felicità, and I had forgotten just how powerful this painting is. I had forgotten what an embarrassing reaction I have every time I’m there, until I felt the first tear rolling down my right cheek. Amy must have noticed as well, and she whispered to me that she was going to go explore the rest of the church for a few minutes, leaving me time alone with the artwork before me.

I don’t know why this time was different, why this time it affected me so profoundly, but the normal two or three tears I shed in appreciation of Pontormo’s magnum opus, were lost in a flood this time. I was so taken by what was in front of me, that I found myself unable to control the inundation of emotion. I reminded myself a bit of Mary Tyler Moore when she was on the Dick Van Dyke show, hiccupping breaths while she tried to regain control of her senses. “Oh (hiccup-breath) Ro-(hiccup-breath)-o-(hiccup-breath)-ob…!” When I start the Mary Tyler Moore crying, it’s time to make an exit.

I silently snuck back out the door, into the bright, hot day outside. The curator of the church was standing there, and with a quick “Grazie,” I hurried past her, out into a quiet corner of the piazza, where I attempted to regain my composure. Now, a quiet corner of a piazza in Florence during the summer means that there are less than 200 people around you. That’s about how quiet a piazza can be during the height of the tourist season, and the people passing by, gave me sympathetic looks of compassion, surely thinking that something terrible must have just happened to leave me alone in a corner crying. I wanted to clarify, shout to them, “I saw something beautiful!”, but deciding that might seem a tad bit odd, I just kept to myself and my tissues.

Eventually, Amy came out of the church, and approaching slowly, she reached out her hand, placing it on my shoulder and asking in a sweet, caring voice, if I was alright. I answered, “No (hiccup-breath), but I will (hiccup-breath) be, in just (hiccup-breath) a moment.” She smiled and waited, listening patiently as I blathered on, hiccupping through my reasons for being so moved by a work of art.

The spell was finally broken when, after seeing the information sign, my friend looked at me and asked, “This church is called ‘Santa Felicità’?”, to which I replied that indeed it was. She then asked, “Doesn’t ‘felicità’ mean ‘happiness’ in Italian?”, and again I concurred. With a wry smile, she told me, “Well then sweetie, I think you better pull yourself together, as I don’t think crying outside the Church of Happiness is doing them a great deal of good publicity!” We had a nice laugh, a quick hug, and then discussing the meaning of life, we left to catch our train.
Posted by Terri Maxfield at 8:36 AM

Who writes this stuff?

Terri Maxfield Lipp
Rome, Roma, Italy
TMLipp: painter, photographer, digital artist ~ "an artist of many hues" TMLipp was born in a tiny midwestern town in the United States, traveled around for quite a bit, and now amazingly finds herself currently living in Rome, Italy. She is in the process of starting up the new and improved Italian phase of her CreativeBeingNess. She spends her time continuing to paint, improving her photography as an art form, and is also currently working on three writing projects that may or may not ever be completed. Her list of artistic influences is long, but some of her very most favorites include: Terry Gilliam, Joseph Beuys, Hannah Höch, Jean-Michel Basquiat, Paul Cézanne, Paul Reubens, Lucian Freud, Tim Burton, Baroness Elsa von Freytag-Loringhoven, Vladimir Radunsky, Joan Miró, Salvador Dalí, Luca Signorelli, Gino Severini, Robert Wiene, Paige Billin-Frye, Alice Pike Barney, Frida Kahlo, Kurt Schwitters, Francis Picabia, Francis Bacon, Mark Mothersbaugh, Ben “Bugs” Hardaway, Charles Schultz, Dr. Seuss…and of course, all the wonderful humanoid individuals around the magic age of 4 that she has ever encountered.